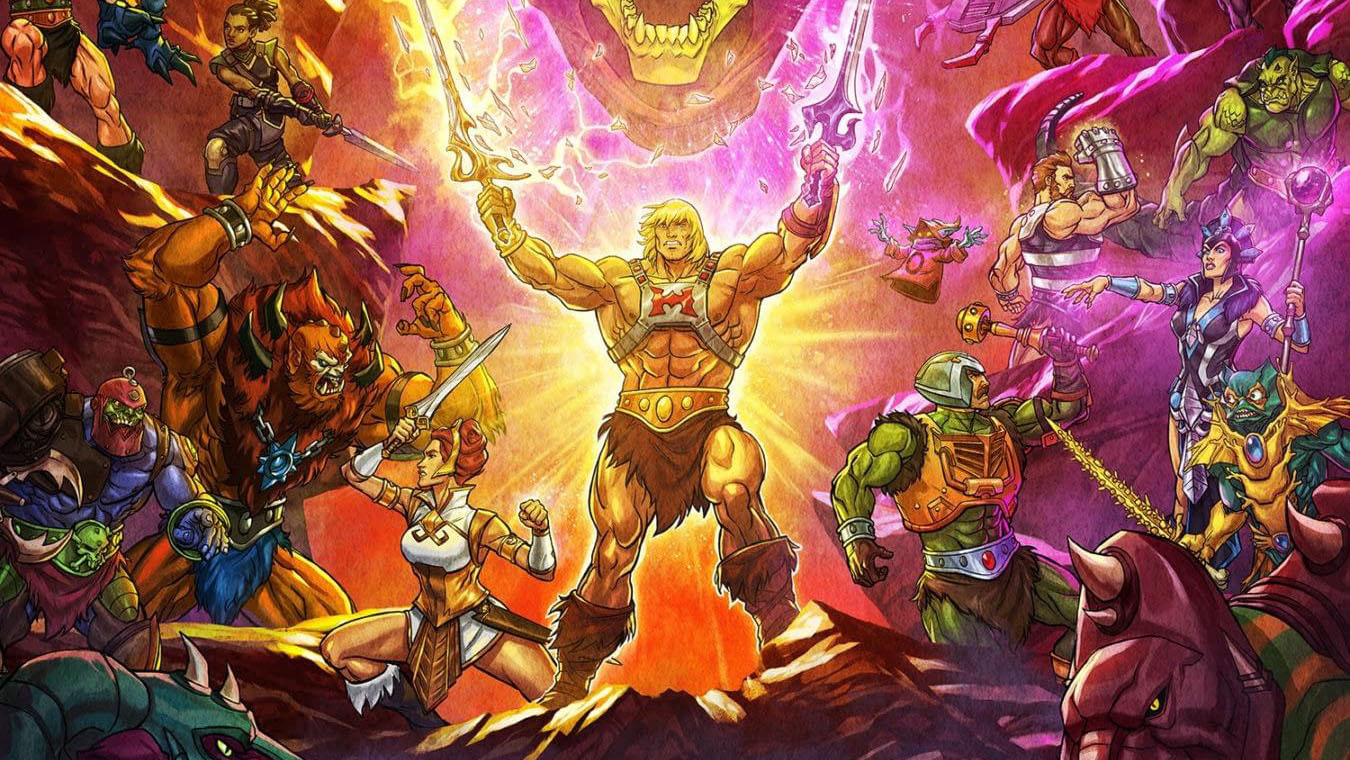 As a little kid I was a huge He-Man fan. I had the action figures. The show was constantly on VHS loop. My group of friends would pretend we were the warriors of Eternia, and I always played He-Man. As a result, my best friend Jimmy always ended up playing Skeletor, much to his dismay. We switched places once and like any 5 year old used to doing things a certain way, I wasn’t into it.

Suffice it to say I’ve been mildly curious about this new show, Masters of the Universe: Revelation. It’s marketed as a continuation of the original, but with the way franchise sequels have been going I knew I couldn’t be too excited because this wasn’t going to be a revival of the original show. They’d do some original spin on it or some-other that would lose the vibe that made the first show appealing.

And that was what happened. While it’s watchable, I wouldn’t call it great, or even good for several reasons; pat emotional arcs, they resolved the most interesting character arc in two episodes, and they sidelined the original show’s hero, He-Man.

Who even does that?

Well, I know what I would have done with it to make it a good story. The bones are there, but this is bad.

I wasn’t expecting my first review to be so negative, and I swear I didn’t read any reviews or commentary about this show from anyone else ahead of time. This is my honest opinion about the storytelling. Ah well.

VAGUE SPOILERS from here on out:

The thing the writers do (mostly) very well is to strike a good balance between revisiting the nostalgic dad jokes and puns of the original show and their attempt at more serious grown-up themes. Still, I think I’m starting to believe that “aging up” kids shows with more mature themes and characterization is a bad idea all around and this is as good example as any of why.

I’ll be blunt. The simplicity of the way the characters work out their differences and traumas make it emotionally untrue. That untruthfulness mars the beauty of the story they try and fail to tell convincingly, and those two things make it bad.

Now let’s be clear, the first show did this too to a degree. After all, their target audience was little boys. They simplified the emotional arcs so 1980’s kiddos like myself could pick up on them. A lot can be forgiven then, but if they’re going to be mixing in more complex adult emotional themes like Revelation does, then I’m going to have a higher bar for characterization.

As it stands in the current iteration, Teela lets her biggest chip fall off her shoulder by the end of Episode 2 by way of going on yet another magical quest of the type she said she’d never, ever go on again, and working with the good guys again even if she doesn’t like some of them as much as she used to. This happens not even half an hour after we see this chip introduced at the end of Episode 1. The last three episodes depict some half-hearted attempts at showing her resolving the leftover grudges against her friends, but by that point the most interesting character arc in the whole show has lost its dramatic steam and was largely mishandled in my view.

Each character arc is rushed and comes off as more informed by warmed over Twitter psychology threads than anything substantively true or resonant except in the most superficial of ways. Half the time characters appear to do things because that’s what the script says and they only have five half hours of runtime, not because that’s what the characters would actually do in that moment.

And it’s all so on the nose. Instead of letting a character realize their fears and why they’re afraid, the fear itself literally villain-monologues the reasons. And the moral of Episode 4 is said with a character winking at the audience as he says it in a way that would make the writers of the original show squirm uncomfortably at its brazen shlockiness, and those original writers wrote some stinkers! I don’t know if this was a literal wink and nod at the after-school-specialness of some of the original show’s moral lessons, but if so it’s the single example of a callback that did not work well at all.

Ultimately, the whole thing parasitically feeds off the nostalgia of the original show to sustain its contrived character arcs and on-the-nose themes. If this were an original IP it would not be nearly so compelling. It is the He-Man IP that makes it interesting, but there’s little this show adds that’s uniquely itself that is true, good, or beautiful, and much of what it adds could easily be found elsewhere.

So how would I have done the show?

I would have kept the same basic A Plot structure about magic disappearing from Eternia because that’s some tried and true fantasy camp, but I would have kept He-Man as the protagonist instead of letting Teela carry the entire show alone (she’d still carry a good chunk of it to be sure). He drove the marketing for this new iteration, he is why the original was so popular, he’s why this show is garnering the interest it has, he’s also the character that differentiates the show from She-Ra, and so it makes commercial sense at least to keep him in that role.

Teela would still have a break with the good guys, and I would make her either the new antagonist or (perhaps more interestingly) a contagonist who emerges with her own agenda contra the good and bad guys. That would allow her arc to stretch across the entire first part more dramatically than it did in this iteration, or perhaps even further, as viewers would be hoping and clamoring to know how Teela and Adam become friends again despite the tragic circumstances. Thus, the final climax of the show would involve her transformation and redemption into something more, with Adam also having learned a thing or two, things the current iteration of the show handles rather ham-fistedly.

The bad and good guys would also get mixed up with each other as they do now, but I’d slow their character interactions waaay the heck down to make it more believable. For example, in my version there would be no intimate confessions of personal backstory and motivation to a sorceress who was your sworn enemy only a few hours ago. That level of intimacy would come in Part 2 of the series at the earliest.

These plot rejiggeries would also allow Adam/He-Man to have a character arc and I would explore making his arc about the perils of using power and how to wield it responsibly. That sounds like a theme for today’s day and age that should satisfy most viewers and speaks to the current moment. It could even be a particular irresponsible use of his power that causes a rift between himself and Teela instead of the whiplash-like pivot to “Everyone lied to me!” that the current iteration of Teela goes with in quite an immature fashion. I mean, she just snaps, and there’s hardly a moment to foreshadow it.

These changes allow He-Man to be a participant in the sequel to the series that bore his namesake without overshadowing Teela’s journey and agency that the writers so intently wanted to highlight. Teela won’t end up becoming the “new She-Woman”, but instead both she and He-Man would become co-leads and equal heirs to the legacy of Castle Grayskull, with the twin powers of reconciliation and forgiveness being the thing that helps the good guys win. There are two halves of that sword after all. This allows this new show to be transformative of the original while better respecting the main character and the fun of the original show, not to mention its audience.

Predictions for Part 2 and Beyond

This site uses Akismet to reduce spam. Learn how your comment data is processed.

So You Want to Make Good Mario Maker 2 Levels?